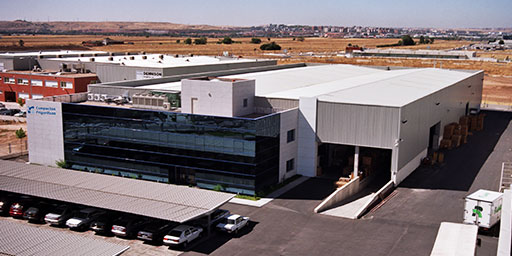 Compactos Frigoríficos was founded in 1982 as a company that produced central and multi-circuit cooled condensing units with Copeland compressors.

Over the following years, the demand for refrigerating plants and coolers took off, to the extent that the company decided to separate production of the latter and take it to a new factory.

Frioblock Ibérica was founded in 1988 for the production of refrigeration machinery in general, plants, coolers, compact units, etc, with the assembly of condenser units, etc, remaining at Compactos Frigoríficos.

FFrioblock was sold to Profroid (Grupo Carrier) in 1993 and definitively shut its doors in the late nineties.
Consequently, in 1994, Compactos began again to produce plants and other refrigerating machinery; a few years later, it began to produce its first air conditioning units.

In 2003, the operation was moved from the old factory at C/ Rio Ebro in the centre of Torrejón to new installations (the current ones) in the Las Monjas Industrial Estate on the outskirts of the city and near to the M-50.

Apart from refrigerating machinery, these modern installations were also used to produce low profile Tango air conditioning units, as well as other air equipment, although production was moved to China three years later.